FRESH CHAPTER FOR THE WORKS WITH £25M DEAL 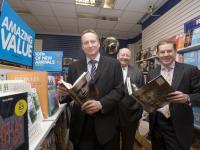 Crashed discount bookshop group, The Works, has been saved along with 2,200 jobs following a £25 million management buyin.

A new team, led by chief executive Anthony Skitt and chairman Alan Smith, say they have developed a robust plan focused on returning the business to its core values.

The Birmingham-based company, built up by former owner Mike Crossley and his wife Jane, was the subject of a management buyout in 2003 and a subsequent secondary £50 million deal in 2006. But the latter transaction did not work out and the firm plunged into administration in January, owing nearly £80 million.

The MBI is backed by what was described in a statement as “a substantial investment” from Endless, the buyout and turnaround fund, and HSBC Bank.

The deal, which was arranged by corporate finance advisers Orbis Partners, means that The Works will recommence trading immediately.

The statement went on: “The agreement sees the re-emergence of a substantial retail business operating over 200 retail stores nationwide with a workforce of 2,200 people and annual turnover of £90 million.

“The business is supported by a head office and 85,000 sq ft distribution centre in Minworth.”

Mr Skitt said: “We believe the business as relevant now as it was when it was founded, and a return to core values along with the further development of the unique value book offering will be at the heart of our future strategies.”

He is a former Time Warner boss who was chief executive of ChoicesUK, the high-street DVD rental chain, when it went into administration last year.

Nick Leitch, investment director of Endless, said: “Our investment alongside management will preserve employment and reinvigorate the business. This adds to the existing five investments Endless now has across the Midlands and I am delighted that it is such a significant transaction. Turnaround is a challenging market and needs the right combination of timely funding, support and expertise.”

James Grenfell, from Orbis Partners who joins the board, said: “The new business has a robust financial structure, ensuring the team have a stable platform from which to develop the business and manage the recovery.”

Tom Durrant, of HBJ Gateley Wareing, and Peter Considine and Simon Hardcastle, of Walker Morris, also advised on the deal.

The Works history dates back to 1984 with the launch of parent company Remainders, formed “to provide customers with quality books at outstanding value”.

It was considered a star performer, but it was never quite the same after the Crossleys left.

Its fall into administration came after a period of rapid – perhaps too rapid – expansion to over 300 stores.

The retailer cited challenging trading conditions due to increased competition as the primary reason for its downfall. Problems with its marketing strategy and a store layout that alienated customers were further factors. It also suffered an over-reliance on Christmas trading.

Administrators Kroll took the knife to the chain and shut 85 loss-making stores, including at the Pallasades in Birmingham, Stafford, Tamworth and Kidderminster. That saw 450 job losses.

But, under Kroll’s management, The Works continued to trade, and a sale has been in the offing for weeks. Mr Crossley said it was “good news” that the business had been saved.

“I am very pleased for the company and those working in it that it has a future. I am sure that in the right hands it will be successful.”

He blamed over-expansion and too much debt loading for the firm’s difficulties.

Mr Crossley is no longer involved with the company.