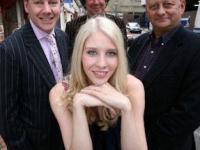 Midlands financiers James Grenfell of Orbis Partners and Roy Howell are leading investors in film production and on line distributor, European Drama Network which specialises in making modern movies from classic plays. Distributing its films via the internet for a global home cinema market it is tapping into the potential for niche film brands created by the growth in on-demand home cinema and TV.

Producer Simon Woods has completed the network’s first film, The Mandrake Root, ready for a June release. Based on a comedy play written in 1512 by the infamous Niccolò Machiavelli it was shot in High Definition on the Mediterranean island of Sardinia. Directed by Italian based British theatre director Malachi Bogdanov the films post production was undertaken in Birmingham. It received completion funding from regional film agency, Screen WM and has just undergone test screenings ahead of a Premier next month.

Featuring Birmingham actress, Chara Jackson, who plays the wife of a foolish lawyer who is tricked into letting another man sleep with her. The film will be released in four languages simultaneously. Available from the companies Internet Protocol TV (IPTV) website, www.europeandrama.net, to rent or buy as a Video on Demand (VoD) or DVD. The sponsored IPTV Channel will offers free programmes about the making of the Network’s films and related programmes, music, posters and scripts.

Previously Simon Woods discovered the pop group UB40 and more recently was CEO of Birmingham School of Acting. James Grenfell is a partner with leading Birmingham corporate finance advisors Orbis and Roy Howell is a special advisor to Games Media, the Midland’s based gaming company he founded.