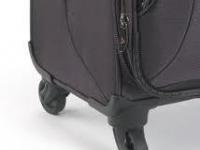 LDC, the leading mid-market private equity firm, has backed the management buyout of Antler – the UK’s number one luggage brand – for an undisclosed sum.

Orbis Partners LLP, the Birmingham based corporate finance business, led the transaction, have invested in Antler and James Grenfell has taken a board role.

Antler, which is headquartered in Bury and has offices in Chicago, North America and China, designs, sources and supplies a wide range of suitcases, holdalls, rucksacks, suit and laptop carriers and business cases under the iconic Antler brand as well as Revelation, Bramble & Brown and Gracie Mae.

Its products – which have become synonymous with reliability and quality - are sold through its own network of UK stores and concessions as well as major multiple retailers and hundreds of independent stores. It also supplies own label ranges for several leading retailers.

Around one fifth of its £40m sales are from overseas markets, predominantly Australia, North America and northern Europe.

Originally established over 90 years ago, Antler has become one of the most recognised names in luggage accounting for almost a quarter of all UK sales – the largest market share of any luggage brand.

The existing team has also been strengthened with the appointment of Chief Executive Officer, David Benjamin, whose experience includes senior marketing and management roles with premium consumer brands.

Following the deal, the management team plans to consolidate the brand’s leading position in the UK luggage market and accelerate sales in several major international markets. These include Australia and North America - where it has already successfully penetrated the travel goods market – and the Far East and Middle East, where it sees significant opportunity for a brand with Antler’s quality and pedigree.

The business also plans to increase the marketing support for its portfolio of brands while continuing its investment in new product development.

David Benjamin, CEO of Antler, said: “With the backing of LDC and Lloyds TSB, a highly capable management team and a sound capital structure, we now have a fantastic opportunity to invest in our brands, continue developing our market-leading luggage range and drive retail distribution in the UK and key international markets.

“The acquisition is an excellent outcome for our dedicated employees, loyal customers and trusted partners, whose continued support we recognise and value greatly.  This is the start of a new chapter for one of Britain’s best loved brands.”

“Its resilience – having retained its market share in one of the worst climates for consumer goods in several decades and consistently delivered good underlying profits – is a clear signal of its strengths.  Now, with the right financial headroom to execute its growth strategy, the company is well placed to take advantage of a recovery in the sector and fulfill its potential at home and overseas.”

Jonathan Boyers, head of corporate finance for KPMG in the North – which has managed the sale process - said: “We’re delighted to conclude a transaction which both safeguards jobs and ensures the long-term future of the Antler brand. From the outset, there was a high level of interest in the business, which is testament to the strength of the brand and the profile of the business.”