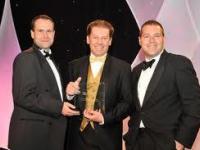 Orbis Partners have won Turnaround Team of the Year at this year’s Dealmaker Awards as well as receiving nominations in 3 other categories.

This is a great result for Orbis Partners given that the competition was from the Big 4 accountants and was closely contested by Endless, the turnaround fund. Insider magazine reported “Orbis has a distinct model, as far as turnaround is concerned. The firm has made more than 20 investments in deals that it has advised on in the past few years and has taken a number of board roles.”

Orbis has worked alongside LDC on the management buyout of Lancashire luggage maker Antler. Orbis Partners led the transaction, invested in the company and James Grenfell has taken a board role. He said: “The deal is our tenth “intrinsic value” investment in which we have provided leadership and investment in businesses that have lost their direction and have too much debt.”

In April Orbis advised Birmingham’s Bromford Holdings on its acquisition of the trade and certain assets of H. Beesley from its administrator, KPMG. The company is complementary to the existing Bromford businesses, which offer fabrication of components for the industrial gas turbine market and high-precision machining for the aerospace and marine sectors.

As well as turnaround deals, Orbis Partners are well known for their advisory work, with high growth successful businesses, on both buy and sell-side transactions. This year they were shortlisted for the fourth successive time as Corporate Finance Advisory Team of the Year. One of the firm’s other deals this year was putting together the management buyout of London’s Elite Creations, one of Europe’s leading suppliers and distributors of fast fashion accessories. Elite supplies more than 30 UK retailers and exports to Spain, Germany, Scandinavia and the Middle East. The deal was led by Gary Ecob who said “There is a great opportunity for Elite to expand in the global market with its design led product initiatives”

As well as these awards, James Grenfell was once again shortlisted for Corporate Finance Adviser of the Year and Dealmaker of the Year.