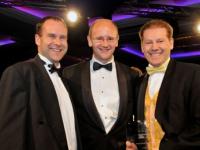 Orbis Partners have maintained their successful track record at the Midlands Insider Dealmakers Awards by winning the Turnaround Team of the Year for the second time in the past three years.

The Midlands Insider Dealmakers Awards gathered 650 top acquisition, finance and buyout professionals at the Hilton Metropole Hotel to celebrate their achievements. The event was compéred by broadcaster Paddy O’Connell and raised money for the Prince's Trust.

In addition to winning the Turnaround Team of the Year Orbis was once again shortlisted for the Corporate Finance Adviser Team of the Year. The team at Orbis has been nominated by their peers in the annual Dealmakers Awards every year since its inception, demonstrating their excellence within corporate finance.