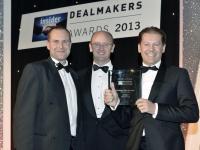 A worthy third time winner whose deals have given the crew at Intrinsic Equity a reputation for being "tenacious in spotting opportunities and driving them through to completion, and experts who can be relied upon to take a sensible approach to a difficult situation".

The annual Midlands Dealmakers awards saw 570 of the region's top professionals, gathered at the Hilton Metropole Hotel, NEC, Birmingham, celebrating the community's achievements after a year which showed signs of recovery.  The event was compéred by former rugby union footballer, Martin Bayfield.  This years chosen charity is NSPCC.

The Turnaround Team of the Year award is sponsored by GVA.