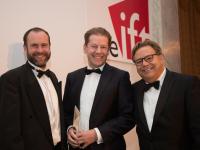 We are delighted to announce that Intrinsic Equity has won the SME 2016 award at the national IFT Awards for the turnaround of Accutronics Ltd. The IFT is Europe's leading representative body for accredited turnaround and transformation professionals.

Accutronics was bought out of administration in September 2009 in a deal led by Intrinsic Equity after the parent company tried to wind down their UK operations and transfer the products to its battery operations in Shanghai. The acquisition saved 47 jobs in Newcastle under Lyme and began the rebuilding of the business over the next six years.

Accutronics is a leading independent designer and manufacturer of smart batteries and charger systems for high-performance, feature-laden portable and handheld electronic devices. Its major customers are European based Medical OEMs. In January this year the team completed the Accutronics transformation with a sale to Ultralife Inc, achieving over 30 times cash return.

James Grenfell, Principal at Intrinsic Equity and Director at Accutronics commented: “We are delighted to have won a national award recognising the turnaround of Accutronics. Over the six years, we have been instrumental in transforming the business from a low margin loss-making assembler of batteries into a design-led, highly profitable manufacturer and assembler of high specification batteries for a very demanding medical OE customer base.  The business has doubled in size since the rescue and invested over £1 million in R&D to create a platform that should see the business continue to grow at 15% per annum.”

Earlier this year the team won Turnaround Team of the Year at the Midlands Insider awards recognising their portfolio exits from The Works, Accutronics and Microlise, as well as its investments in Laidlaw and powerPerfector.