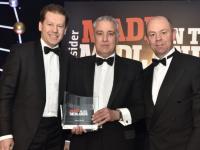 The achievements of some of the region's top manufacturers have been recognised at Insider's Made in the Midlands Awards on 20-May. The event held at the Hilton Birmingham Metropole NEC and hosted by Declan Curry, presented eight awards to the most impressive Midlands manufacturers.

Kurt Jacobs, editor of Midlands Business Insider, praised all the assembled businesses. "To say that Midlands manufacturing is enjoying a renaissance is an understatement," he said. "You, and thousands of businesses like you, are responsible for rebalancing Britain away from an over reliance on the services and South East to a more equal, broader based economy. Yes you face challenges, such as finance, innovation, red tape and most of all skills. But increasingly those challenges are those brought about through success."

Abacus Lighting had a successful win picking up the Exporter Award out of the five companies shortlisted for the award. The business proved themselves to be a leading example of a local business making waves in international markets with its strong export business.

“Abacus makes exterior lighting and has been selling to countries from Africa to New Zealand, with international sales rising from a fifth to a third of its £20m turnover in just a year. Abacus demonstrated a well-planned overseas strategy, concentrating on developing niche products with a global reach; judges agreed this is the sort of business that UK manufacturing needs much more of.”

The Exporter Award is sponsored by HSBC and allows Abacus to represent the Midlands in the national Made in the UK event in July.