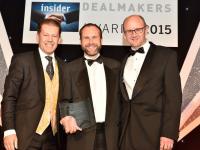 Intrinsic’s turnaround triumph continues winning the ‘Turnaround Team of the Year’ award for the fifth consecutive year. The team were recognised for the turnaround of industrial acoustics business TMAT which was acquired in 2009 for £200k and successfully exited in late 2014 for £5.3m.

The team was also highlighted for investing in the £10m restructuring of Midlands based Homebuy, a leading retail credit business to the sub-prime market.

Comedian Fred MacAulay was the compere for the evening which celebrated the achievements of a resurgent year in the industry, and was the 21st annual awards staged by Insider. The awards joined together over 630 people to celebrate at The Metropole Hotel in Birmingham and raised money for JDRF (Juvenile Diabetes Research Foundation).

The Turnaround Team of the Year was sponsored by Bilfinger GVA.